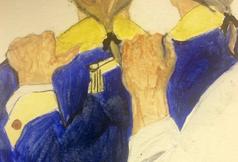 The ambitious young immigrant, with a burning desire to make his mark through battlefield glory, instead finds himself toiling behind a desk as Washington's chief military aide.

With an iron will, forged in battles fought twenty years earlier, this wealthy Virginia planter risks it all to lead a fledgling American nation against the greatest military power on earth.

The protection, backing or support of a particular person or organization.  In classical art and mythology, an attribute of Zeus and Athena (or their Roman counterparts Jupiter and Minerva) usually represented as a goatskin shield.​​

Shortly after the unexpected death of George Washington on December 14 1799, Alexander Hamilton, ever the master of the English language, wrote the following poignant note to Washington’s long-time personal secretary Tobias Lear:

“…. The very painful event ….  filled my heart with bitterness.  Perhaps no man in this community has equal cause with myself to deplore the loss.  I have been much indebted to the kindness of the General, and he was an aegis very essential to me.  But regrets are unavailing. For great misfortunes it is the business of reason to seek consolation.  .... If virtue can secure happiness in another world, he is happy.”

This letter marked the close of a 22-year partnership, sometimes bent but never broken, between Hamilton and Washington, two men who were so instrumental in the founding of the United States of America.  The film Aegis for Dreams is the first chapter of this epic relationship, forged in the fires of America’s eight year struggle for Independence.  It is a story with universal themes of love, loyalty, honesty and betrayal that will, as never before in cinema, emotionally connect the viewer to some of the principal actors in the American Revolution.