Wolfgang Amadeus Mozart (January 27, 1756 – December 5, 1791). This prolific and influential Austrian composer of the Classical era is widely recognized as one of the greatest composers in the history of Western music.  In his brief 35 year lifetime, he composed more than 600 works, many acknowledged as pinnacles of symphonic, concertante, chamber, operatic, and choral music.   Learn more.

Born one year after Hamilton, Mozart composed all of his works during the era of America's founding.  240 years later, both endure.

​​Mozart first composed this in 1782 as a march, and converted it to a symphony the following year.  This work was commissioned by the Haffners, a prominent Salzburg family, for the occasion of Sigmund Haffner the Younger's ennoblement ceremony.  Thus, it serves as an ironic accompaniment to what many historians consider to be Washington's greatest act - resigning his commission, and thereby relinquishing the power of a conquering military hero. Listen here.  For more on Washington resigning his commission, read here.  When hearing rumors of Washington's impending resignaton and return to his Mount Vernon farm, he stated "if he does that, he will be the greatest man in the world".  Read on. 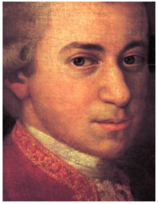 The 22 year old Mozart composed this symphony in early 1778, during a disastrous job-hunting sojourn in Paris.   His mother and chaperone Maria Anna contracted an illness and died in a dank, frigid Paris hotel room.  Read more.  This trip coincided with the American Army's epic struggles at Valley Forge during the winter of 1777-78. Of the 12,000 soldiers who marched into Valley Forge, 2,000 died, many from typhus, typhoid, dysentery and influenza.  The Paris Symphony premiered in a private home of a Parisian on June 12,  listen  just as the newly trained Continental Army prepared to de-camp and engage the British Army at the Battle of Monmouth Courthouse. Read more. 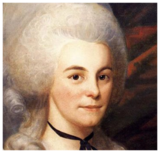 (Washington resigns his commission at Annapolis, 1783) 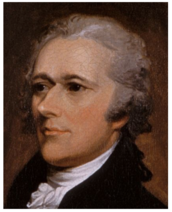 The 14 year-old Mozart wrote this opera seria in three acts while touring Italy in 1770. It was first performed at the Teatro Regio Ducal, Milan, on  December 26, 1770 (at the Milan Carnival). It was a success, having been performed twenty-one times despite doubts because of Mozart's extreme youth.  Listen to the overture, then read more.   A year earlier, the 14 year old Hamilton, having been abandoned by his father and mourning the loss of his mother to a fatal fever, operated a trading company in St. Croix for a wealthy merchant.

Mozart premiered this work in Vienna’s Mehlgrube Casino on February 11, 1785, performing as the soloist. Mozart friend, the eminent composer Joseph Haydn was in attendance. Also present was Wolfgang’s father, Leopold, visiting from Salzburg.  Father and son had not seen each other in nearly two years. The young Ludwig van Beethoven, 15 years Mozart’s junior, admired this concerto and kept it in his repertoire.   Listen here to Martha Argerich's virtuoso performance and then Read more  about this work.

Written in 1782-83, this work premiered in Salzburg on October 26, 1783. Mozart had moved to Vienna in 1781. This was the first meeting of Constanze and his father or sister Nannerl, who opted not to attend their Vienna wedding the prior summer, despite Mozart’s pleadings. Constanze performed as soprano soloist.  Many view this work as Mozart’s offering of a symbol of reconciliation between he and his family, and their acceptance of Constanze as his wife.  The work remained unfinished during his brief lifetime.  Listen here; read more

Although Hamilton's wedding to Eliza on December 14, 1780 in the South Parlor of the Schuyler Mansion was a joyous affair, he too wrote to his father asking, without success, that he attend the wedding.  Hamilton sole guest was fellow aide-de-camp, Col. James McHenry.